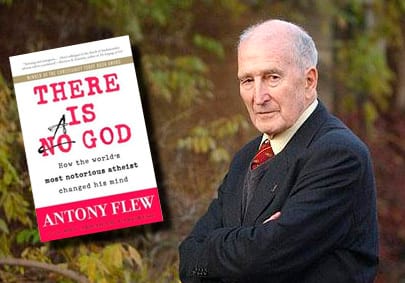 The death of Antony Flew brings an end to one of the most interesting lives in twentieth century philosophy. Throughout the last half of that century, Professor Flew was recognized as one of the most significant philosophical advocates of atheism, eventually writing at least 35 works, many arguing for the non-existence of God. Then, at age 81, Antony Flew changed his mind. God, he explained, probably does exist.

The story of Antony Flew’s embrace and then eventual rejection of atheism is both fascinating and instructive. Born into the London home of a prominent British Methodist minister, Flew was surrounded by Christianity. “I was not always an atheist,” he explained. “I began life quite religiously. I was raised in a Christian home and attended a private Christian school. In fact, I am the son of a preacher.”

Indeed, Flew not only attended a private Christian school, he was in fact educated at the Kingswood School, a school for boys established by none other than John Wesley himself. As he recalled, “I entered Kingswood as a committed and conscientious, if unenthusiastic, Christian.”

So, how did Antony Flew become an atheist? The critical issue was the challenge of evil. As an adolescent, Flew came to the conclusion that God could not be simultaneously both good and all-powerful. The conflict Flew saw between the love and the omnipotence of God led to a devastating loss of faith. Looking back, Flew commented that “by the time I reached my fifteenth birthday, I rejected the thesis that the universe was created by an all-good, all-powerful God.”

During his studies and a year of teaching at Oxford, Flew participated in the Socratic Club, whose president from 1942-1954 was C. S. Lewis. A paper Flew read to the club entitled “Theology and Falsification” became one of the defining moments of Flew’s career. Mark Oppenheimer would later describe the paper as “a heroic tract for committed atheists.” Though Flew was originally assumed to be a proponent of analytical philosophy along the lines of A. J. Ayer, he actually believed himself to have refuted Ayer’s claim that theological beliefs cannot be true simply because they cannot be falsified. Instead, Flew argued, theological assertions should be considered to be false simply because there is no adequate evidence to confirm them.

Over the next several decades, Professor Flew taught at a series of colleges and universities and wrote a small library of philosophical works, many espousing and supporting atheism. He was also involved in public debates on the issue. His writings were widely circulated among philosophers and university students, and, despite the fact that he also wrote on other philosophical questions, his personal reputation was inseparable from his atheism.

Nevertheless, his atheism was not so well-established as it seemed. The key transition in Flew’s life happened when he began to believe in something very much like the theory of Intelligent Design. “My departure from atheism was not occasioned by any new phenomenon or argument,” Flew insisted in 2007. “Over the last two decades, my whole framework of thought has been in a state of migration. This was a consequence of my continuing assessment of the evidence of nature.”

By 2004, Flew publicly denied that life could have emerged from matter alone. Eventually, Flew came to insist that the laws of nature could only have come from a divine mind. In other words, there must be a God.

Flew’s public announcement in 2004 that he had rejected atheism and embraced some kind of belief in God was a philosophical bombshell. Evangelicals championed his rejection of non-belief and were cheered by the public nature of his announcement. Nevertheless, a closer look was needed.

Antony Flew never embraced Christianity. He rejected the possibility of divine revelation and flatly rejected the idea of divine judgment and hell. He told The Sunday Telegraph [London] that the God he had come to believe “probably” existed is “most emphatically not the eternally rewarding and eternally torturing God of either Christianity or Islam,” but only God as First Cause of the universe. In other words, Antony Flew embraced a form of Deism (the belief in a God who creates but then removed himself from creation), rather than theism (the belief in a communicating, ruling, and judging deity).

When atheist critics suggested that Professor Flew, then in advanced age, had experienced something like a deathbed conversion out of fear of death, the professor retorted with a rejection of any afterlife. “I want to be dead when I am dead and that’s an end to it,” he made clear. “I don’t want an unending life. I don’t want anything without end.”

The life of Antony Flew provides us all with significant lessons and insights. First, we are reminded of the fact that basic and important questions of faith often arise in adolescence. The biography of Antony Flew may well have been remarkably different had his theological questions and concerns been treated with dignity and seen as an opportunity by the mature Christians around him.

Second, Flew’s intellectual pilgrimage underlines the fact that the boldest atheistic arguments are often put forth by people who are closer to belief in God than may first appear. In retrospect, Antony Flew had dropped hints of openness to belief in God, even as he was recognized as one of the world’s most famous atheists. Many prominent Christians, now and in the past, were once fervent atheists. Atheists, we should note, at least consider the question of the existence of God to be consequential and important.

Third, the conclusion of Antony Flew’s life must affirm for us the fact that the rejection of atheism does not always lead to an embrace of Christianity. Salvation comes only to those who come to belief and faith in the Lord Jesus Christ — not to those who merely embrace the existence of a divine First Cause. Rejecting atheism is not enough.