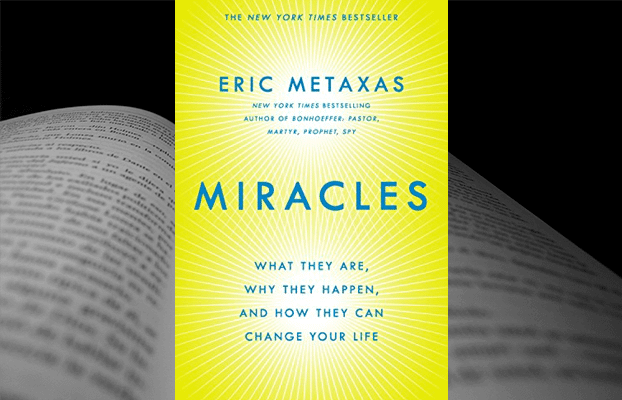 Miracles from the unfathomable to the banal are carefully studied by Eric Metaxas in his new book. What makes “Miracles” special is Metaxas’ personal recounting of stories from his life or the lives of his friends or professional acquaintances. Those looking for proof that God exists just might find the evidence in some of the most remarkable miracles, beginning with the creation of the universe itself, to the miracle of totally transformed lives.

What if the God who exploded the Big Bang — the God who created the entire universe with all its myriad galaxies and numberless stars — what if that God was the same Divinely Intelligent Being interested in helping you find your lost car keys?

Miracles from the unfathomable to the banal are carefully studied by Eric Metaxas in “Miracles: What They Are, Why They Happen, and How They Can Change Your Life.”

What makes “Miracles” compelling is Metaxas personal recounting of stories from his life or the lives of his friends or professional acquaintances.

As in his previous works, specifically “Bonhoeffer: Pastor, Martyr, Prophet, Spy” and “Amazing Grace: William Wilberforce and the Heroic Campaign to End Slavery,” Metaxas extensively researches each story and miraculous claim to assure the astonishing event was not just simply some remarkable coincidence. Miracles, Metaxas explains, are God’s way of communicating to us that He is real and that we matter to him personally:

Because if you believe in just that one miracle, it will open up the world of miracles itself, will lead you back into a world where those miracles themselves point to the larger truth, point to the place where they came from and are signposts to that place, signs for us here to know that there is a place there…”

Those looking for proof that God exists just might find the evidence in the first part of “Miracles.” Several chapters of the book are dedicated to the biggest miracle of all: the universe. Metaxas states that scientists generally agree with the Big Bang theory, that all creation exploded into an ordered existence eventually permitting man to exist on Earth — the one and only planet where all atmospheric and solid chemical matters worked together so intricately well that all life became possible. The chapter, “Is Life a Miracle,” delves extensively into a few of those miraculous things we take for granted, from the properties of the ice cube cooling your favorite beverage, to the “so nuts” creation of the moon.

Metaxas also examines the evidence behind miracles recounted in both the Old and New Testaments of the Bible. Biblical phenomenon, including undeniable facts concerning the bodily resurrection of Jesus from the tomb, flow naturally from the creation of the universe because of their “personal” nature. Those who experienced the miracles, whether walking through the parting of the Red Sea or talking with Jesus after that first Easter Sunday morning, witnessed a God who not only saved and/or changed their lives, but a God who revealed something about himself. The proof that God exists had become “personal” to men of centuries past, because God wanted them to know how deeply he loved and cared for them.

And these miracle stories continue today. In the second part of “Miracles,” Metaxas specifically relays dozens of stories where the miraculous touched or transformed lives in various ways. Some were saved within tragedies like 9/11, one saw angels, one experienced walking through heaven itself, some were part of science-confounding healings, and one, yes, even witnessed the miraculous reappearing of her lost keys.

Regarding that “lost keys” miracle, Metaxas, presenting a serious subject with his usual wit, says that “most people think that a God who wastes his time doing parlor tricks…while allowing the Holocaust to happen, must be nothing more than an infinite-size superjerk.” The author acknowledges the legitimacy of that sentiment, writing, “It’s a question that needs to be answered, or at least discussed.” (This subject has been addressed within Metaxas’ bimonthly New York City forum, Socrates in the City.)

Much of the book illustrates a very basic revelation: “[M]iracles are always examples of God communicating with us in some fashion.” He is often very intimate in his communication, “as though God wants more than anything to let us know he is with us. He sees what we are going through and he cares.”

Most engaging about “Miracles” is the matter-of-fact way Metaxas describes the people and astounding events as they unfold. What eventually “plays out” seems the most natural thing to happen. What else can be expected? If God exists and cares about his creation, why would he not care about each part of his creation — especially those created in His own image?

Metaxas shows that miracles are experienced by non-Christians and Christians alike. However, the miraculous event resulted in making true believers in a loving, creative God out of all those who did not previously believe.

“Miracles” presents well-researched evidence to answer one of those too-good-to-be-true questions of life. A fair-minded reading might produce another Big Bang of sorts, opening the reader’s mind to a whole new universe of the possible.