Can Science Point to God? 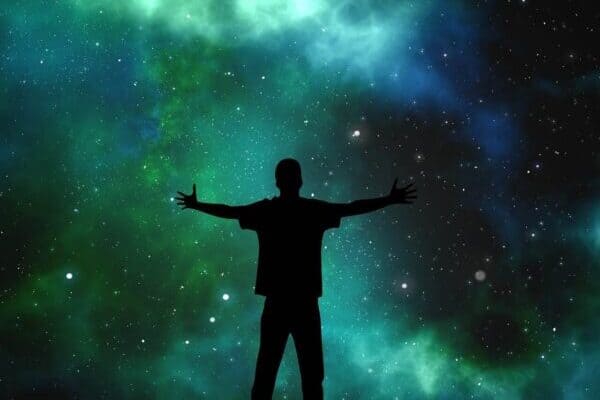 I could have told you in one word why I was an atheist-science. Science seemed to explain the world quite handily without invoking some great big bearded grandfather in the sky. However, that didn’t make me hostile to religion. If you had asked me whether I would have liked there to be a God, I would have said yes. If given a choice between a universe governed by a benevolent creator versus a universe where nothing happens for any reason except the laws of physics, I would have chosen the former. But I would have quickly added that my preference wasn’t the issue. Feelings don’t determine truth.

Ironically, my faith in science was shaken by a scientific finding I first read about in Richard Dawkins’ The God Delusion. In Dawkins’ attempt to disprove all arguments for God’s existence, he introduced me to what is often called the ‘fine-tuning’ argument. Dawkins puts it this way: “Physicists have calculated that, if the laws and constants of physics had been even slightly different, the universe would have developed in such a way that life would have been impossible.” In other words, the fundamental constants of physics seem to be fine-tuned in order to enable life as we know it. Dawkins uses the strong force (the force that binds protons and neutrons together in the atom’s nucleus) as an example. He says, “If the strong force were too small, say .006 instead of .007, the universe would contain nothing but hydrogen, and no interesting chemistry could result. [which means that no life could exist] If it were too large, say .008, all the hydrogen would have fused to make heavier elements. A chemistry without hydrogen could not generate life as we know it. . . .The Goldilocks value–.007–is just right.”

The December 2008 issue of Discover, a mainstream science magazine, looked at the fine-tuning of the universe and said this: “Tweak the laws of physics in just about any way . . and life as we know it would not exist.” . . . “In some strange sense, it appears that we are not adapted to the universe; the universe is adapted to us.” . . .”There are many such examples of the universe’s life-friendly properties–so many, in fact, that physicists can’t dismiss them all as mere accidents.”

In the documentary, Collision, Dawkins’ fellow best-selling atheist Christopher Hitchens called the fine-tuning argument the best argument for God he’s come across. He said that all atheists have to spend time working on it and thinking about it since it is far from a trivial problem for the atheist position.

Or consider this from BioLogos, a foundation created by Dr. Francis Collins to create discussions between science and Christian faith.. (Dr. Collins was the head of the Human Genome Project which sequenced all of human DNA. He was later appointed by President Obama to head the National Institute of Health). “Another interesting example of a finely-tuned initial condition is the critical density of the universe. In order to evolve in a life-sustaining manner, the universe must have maintained an extremely precise overall density. The precision of density must have been so great that a change of one part in 1015 (i.e. 0.0000000000001%) would have resulted in a collapse, or big crunch, occurring far too early for life to have developed, or there would have been an expansion so rapid that no stars, galaxies or life could have formed. This degree of precision would be like a blindfolded man choosing a single lucky penny in a pile large enough to pay off the United States’ national debt.”

I state all these quotations from both believers and atheists in order to make the point that none of this is controversial. This discussion of fine-tuning has nothing to do with evolution. All parties-atheists and theists alike agree to the basic fact; they just disagree about the interpretation of this scientific data.

The first thing I noticed about the fine-tuning of the universe is its unexpectedness from a scientific point of view. Within the scientifically atheist worldview, life differs from non- life only insofar as its chemical properties are distinct, not insofar as one is more “valuable” than the other. Stated differently, a purely scientific universe does not care whether matter is alive or not; the difference between a human and a rock is merely a matter of complexity. Since the universe does not care about life, the laws of physics should contain no preference for life. And yet science has discovered that they do exactly that. This is why I find the fine-tuning of the universe so powerful. Science works by making testable predictions. The prediction of scientifcaly-minded atheism is undercut by science itself.

I must pause to note that this is not a “God of the gaps” argument. It is not merely that at this point in time science does not have an explanation for a specific phenomena. Instead, the fine-tuning problem is a result of the discovered fundamental laws of physics. Since we use those laws to explain everything else, the fine-tuning cannot be explained away by anything else. It appears to be fundamentally built into our universe.

It’s quite ironic because either of these “explanations” destroys the scientifically-minded atheist’s best arguments against God. Atheists like to claim that they possess “reason” while believers possess “faith.” They possess “explanations” while believers dwell in “mystery.” But if atheists respond to the fine-tuning argument by saying that it’s all just an inexplicable coincidence, then they are saying that science-and atheism itself- ends in mystery. I cannot see any difference here between this response and a Christian shrugging his shoulders and saying, “Only God knows.”

A different version of the problem occurs if an atheist attempts to take refuge in the idea of the multiverse. Normally, scientists will say to a religious believer, “We can explain so much without positing any “superfluous” entities like God. If we can explain everything through science, why bring God into the picture at all? What work does God do? Why grant that God exists?” Yet look at what the atheist does here. The religious believer may posit one God that they cannot prove, but here the atheist is positing an infinite number of universes that they cannot prove! Nor is it clear that the multiverse is even falsifiable-the criteria which is at the very heart of science!

In all honesty, I must admit that the fine-tuning argument is limited in scope. I believe it offers excellent evidence for the existence of God, but I must admit that it says little beyond that basic point. It says nothing about whether this God is the God of the Bible, the God of the Qu’ran or a deistic God that couldn’t care less about any of us. But I find the argument powerful for three reasons. First, it is objective. This isn’t some wishy- washy “reach out with your feelings” type of mumbo-jumbo. Rather–shocking as this may sound–science itself is pointing towards God. Secondly, it is unexpected. This simply is not what an atheistic universe would look like. Third, it showed me that we’re all people of faith-atheists and believers alike. All the responses to the fine-tuning argument are just as much unproven positions of faith as my belief in the Christian God. And when I realized that I, a former atheist, was a person of faith, it opened me up to the possibility that, as Hamlet says, “There are more things in heaven and earth than are dreamt of in my philosophy.”