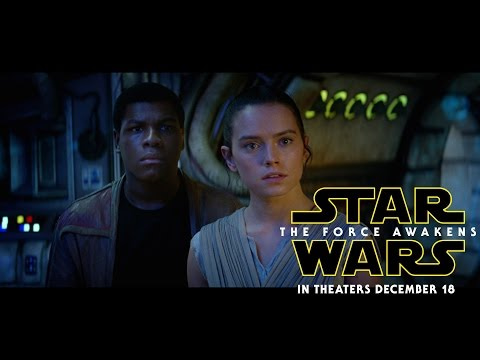 I could feel the excitement and enthusiasm all around me as I sat in the cinema packed with young people ready to watch the new Star Wars film. From the opening scenes they were clearly gripped by the story and impressed by the cinematography, as indeed was I. But, as we walked out together, I was also thinking about the opportunities and challenges that this film highlights for those of us involved in spiritual, moral, social and cultural education (known as SMSC in today’s school curriculum).
Although the film essentially repeated the familiar Star Wars formula, many subtle differences between it and the first Star Wars powerfully illustrate some important underlying changes in our culture over the intervening forty years – which have implications for those of us involved in spiritual education. Here are just three examples:

Global politics: how do we prevent radicalisation?
The first Star Wars was written against the backdrop of the cold war and the threat of the communist bloc. This was reflected in the Empire with its army of identical, mass-produced, soldiers.  But, in The Force Awakens we meet storm troopers who are trained and shaped into cannon-fodder from a young age, when they were separated from their communities and indoctrinated into obedience. Inevitably, the film reflects something of the current global threat of extremist terrorists. Kylo Ren, wearing a black mask in homage to Darth Vader, was turned to the dark side whilst separated from his family who, in a central scene, ask whether someone so radicalised would return to their home. That’s a pertinent question for many today as we seek to engage in appropriate spiritual, moral, social and cultural education to help prevent radicalisation of young people in our communities.

Feminism: what does it mean to be a woman?
In the first Star Wars, Princess Leia was not the classic helpless damsel-in-distress of pre-feminist adventure films. She held power and could handle a weapon when required. But, nonetheless, she was different from the male leading characters; contrasting with the rugged self-sufficiency of Han Solo and the warrior spirit of Luke Skywalker. Now, what of Rey, the female lead in The Force Awakens? She is looking for reconnection with her family rather than rescue from distress. But she is also ruggedly self-sufficient and a powerful warrior, who shouts at her would-be rescuer ‘Stop taking my hand!’ In many ways this female hero dresses like the men and acts like the men. Films not only illustrate people’s worldviews but also influence them. So, whilst we reflect upon how Rey’s character illustrates the contemporary view of women as being equivalent to men in every respect, we should also consider the effect it will have on the next generation of young women. What character traits of the self-sufficient warrior Rey will they seek to emulate in their own lives? And how, in the context of spiritual, moral, social and cultural education, can we for example help all young people to explore historical spiritual wisdom about what it means to be a woman or a man?

Ethics: who can say what’s right or wrong?
In the first Star Wars we were introduced to the force, with its dark side, and the need for balance. This reflected the influence on culture of various religious beliefs that view evil as equal and balancing to good, contrasting for example with the biblical concept of evil as a corruption of good which will ultimately destroy it. The Force Awakens reflects a culture that has, over the past forty years, moved even further from the historical biblical concept of good and evil, into a postmodern assumption that ethics is a matter of personal perspective. This was the seventh film in the Star Wars franchise but it was the first to use the term ‘the light side’. The earlier films, although reflecting an equal/opposite view of good/evil, still retained the implicit assumption of our culture’s biblical heritage that evil is a corruption of good, which is perhaps why it was only the dark side that needed to be named, because ‘the light side’ had an implicit assumed status. Now, in our culture so heavily influenced by the postmodern assertion that we construct our own reality, right and wrong and good and evil are often viewed as matters of individual choice; and online Star Wars games invite us to choose the light or the dark side, as if each are equally valid choices. Those of us who treasure the historical spiritual wisdom of the Bible, with its teaching about good and evil, clearly have much to do if we are to help today’s generation think for themselves about right, wrong, forgiveness and redemption.

Star Wars: The Force Awakens is available now on DVD and Blu-ray. Order your copy from Amazon.