Why the Critics Are Attacking “Ben-Hur” 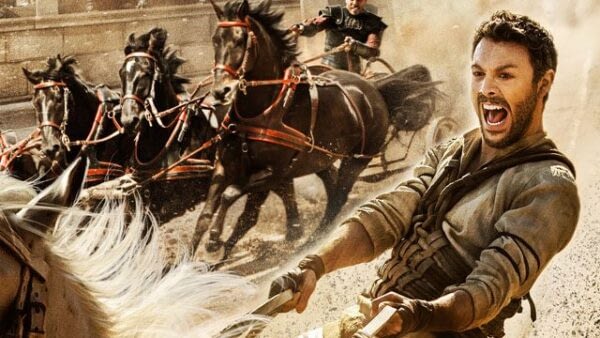 The new Ben-Hur is a terrific movie. It is exciting, suspenseful, filled with clashes of spirit, interest, and personality, and offers a story of brotherly love, conflict, revenge, and redemption. Religious faith and the spirit of forgiveness are at its core, though not front and center. It is precisely the kind of movie people in a healthy culture would flock to see and enjoy.

Some people may recall the story of Ben-Hur from the 1959 epic starring Charlton Heston. Bigger than life, filled with detail and pathos, this classic version was a blockbuster that swept the Academy Awards. The new movie is no re-make. It is tighter, shorter, at times actually understated, and weaves into its drama a clearer message of forgiveness and redemption. Both movies, like several other renderings, stem from the late nineteenth-century novel, by Lew Wallace, with its overtly Christian message.

In the latest retelling, we witness the friendship of Judah Ben-Hur, a Jewish prince, with his adopted, Roman brother, Messala. The friendship is strained by Messala’s feelings of shame at his grandfather’s supposed weakness and at being an outsider in his own home. Messala goes off to be a Roman soldier, returning to Jerusalem with Roman governor Pontius Pilate. He argues with Judah and accuses him of treason, consigning him to life as a galley slave. Judah escapes and returns for revenge. There is a climactic (and spellbinding) scene in which the two compete in a deadly chariot race. The hatred between the brothers is broken only by Judah’s experience as a witness to Christ’s crucifixion; it turns out that Judah has met Christ before, and His message finally sinks in. Christ’s role in the story does not take much screen time and is intentionally fragmentary, even as it resolves the film’s conflicts. One is free to fully embrace the message of redemption or leave it as a story of one man’s experience; faith is portrayed, not preached.

This should be the kind of movie one can experience on a regular basis. Sadly, movies about religion—the Jewish and Christian religions in particular—today fall into two disparate categories. On one side are explicitly faith-based films like God’s not Dead and Heaven is for Real. Many of these films are excellent (some are not). But they clearly are made for a specific “niche” market. Critics safely ignore them, and while the mainstream media does not like them, they are safely “other.” The other side is filled with pseudo-religious dreck like Noah, which “re-imagine” religious stories to suit the ideology and/or idiosyncrasies of the movie-makers. These latter movies have tended to bomb at the box office, as they deserve.

The recent Risen and Ben-Hur represent a newer (or rather older, pre-1960s) category of film that takes its religion in stride, as integral to the story when and where this fits the story. Such movies ought to be natural parts of popular culture in a nation that remains seventy-percent believing Christian. Unfortunately, they are downright rare.

And apparently unwelcome. Risen was a modest movie that did a modest business. Ben-Hur, aimed higher, cost more, and, it seems, is not doing well at the box office. Indeed, the mainstream press is rather loudly proclaiming it to be a “bomb.” Time will tell how the movie fares financially. We already know that the critics want it to fade away ignominiously, though I tend to think it will grow rather than diminish in stature over time. The problem with Ben-Hur is precisely that it takes religion both seriously and in stride, as a normal part of life—not in the sense of being mundane, but of being a natural part of human experience, striving, and meaning. This is not a problem for the movie itself; it really is excellent. But it is a very real problem for the critics and, apparently, a bit of a problem for marketers in our fragmented society.

The story that seems to be emerging from the media is that Ben-Hur, helmed by the duo of Mark Burnett and Roma Downey, who brought us the highly successful The Bible and A.D., is that it fell between the stools of mainstream and faith-based movies. Oh, and that it is a lousy movie. The latter argument is specious, but both tell us something about the state of our culture.

Let us begin with the critics. Reviewers from the New York Times, Variety, the New York Daily News, and several other periodicals here and abroad savaged the movie as pedestrian but over the top, convoluted but simplistic, and mostly simply without a reason to exist. Oh, yes, perhaps the most common complaint is that it lacks the homoerotic subtext Gore Vidal insisted (to Charlton Heston’s anger and disdain) he had surreptitiously written into the 1959 epic. All this simply goes to show that mainstream critics know what they like, and the definitely do not like Christian messages in their movies—unless, of course, they can be read “transgressively” to undermine themselves. No surprise there.

Remember Mel Gibson’s The Passion of the Christ? Critics would like to forget it, and nearly destroyed Jim Caviezel’s career over it. Mr. Caviezel’s powerfully understated performance (his Christ was in the process of taking our sins onto Himself, after all) was maligned as weak and even wooden by critics who clearly had no idea what he was supposed to be doing, and would not appreciate it if they did. The same type of thing seems to be happening to Ben-Hur. One cannot be certain which fault will be found in any serious portrayal of Christ. But fault—serious, damning fault—will be found.

As to the marketing, it may be true that those in charge of selling Ben-Hur made some mistakes. Apparently, some faith-based marketers thought the trailers were not sufficiently “on-message.” As for the mainstream audience, perhaps it was naïve to think that a “sword-and-sandal” movie integrating religion into the story as what it is, an important aspect of life, could appeal to those self-consciously concerned with their faith as well as more mainstream moviegoers who express belief and even try to live it, but consider the multiplex a place for adolescent fantasy and cheap, vulgar laughs. As I walked out of the theater showing Ben-Hur, a far larger crowd was leaving Seth Rogan’s latest exercise in smug narcissism, Sausage Party. I tend to believe, however, that there remains a substantial potential audience for entertainment that is not degrading if it is properly cultivated and allowed to see the truth about what is on offer.

Ben-Hur’s creative team appear not to have counted on the savaging they would receive from mainstream critics. They should have, of course. This is the same mainstream media that declares their political opponents to be the reincarnation of Hitler every four years while demanding that anyone who investigates Planned Parenthood’s sales of baby body parts be thrown in jail for fraud. The claim, of course, is that Christians in particular are terrible people who want to ruin people’s “fun” by claiming they are “better than everyone else” or “forcing a lame narrative” onto a presumably secular world.

The real problem is that we truly are in the midst of a culture war. Or, rather, we are in the midst of the left’s mopping-up operation at what they perceive to be the end of that war. Such wars are never lost or won, for we always are torn between our appetites and the better angels of our nature. But when those who have given themselves over to self-indulgence believe such a corrupt form of life can continue forever, they will have no patience for natural drives, like those to faith and redemption. One cannot “mainstream” faith in a culture that sees faith as a danger to its very being.

None of these difficulties should take away from what the makers of Ben-Hur attempted, or what they accomplished. One can only hope that Mr. Burnett and Ms.  Downey continue to provide entertainment for people who are open to faith, and that the very presence of such fare will help spread such openness. As to Ben-Hur, one hopes that enough people—Christian or not—recognize this latest movie for the exciting, refreshing experience it is and so keep up support for the growing counterculture of films that respect our religious nature.