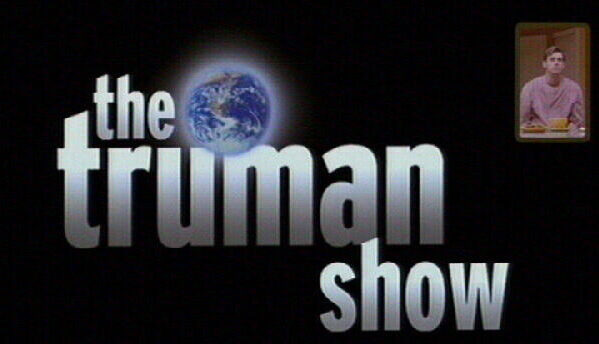 “The Truman Show” presents a television mogul’s dream. Reality television is a guaranteed audience pleaser today. Shows like “America’s Funniest Home Videos” have been followed by police and crime dramas about real fugitives and for the younger generation there’s always MTV’s “Real World.” “The Truman Show”, the film titled after its television show, goes to a new degree of reality television; it’s a show that is twenty-four hour live coverage of a man’s life in a Hollywood-created world.

The film clearly presents two reasons as to why this program, “The Truman Show,” and really all reality television would be so popular. The first is that we live in a media and entertainment obsessed culture. Ninety-nine percent of the population of the United States owns a television, and it’s not just having it on that is entertaining. Individual shows, characters, and story lines gain their own following. The concept of the season finale and the season premiere are dependent on the fact that people will care enough about what’s happening to come back again in the fall. We want to find out if some fictional character will get married, survive the gunshot wound, or still be working at the same hospital in the fall. And we care. No, they aren’t real. No, they have no bearing on our lives. But audiences will faithfully be there enthralled and waiting for what’s going to happen just as the viewing audience that we see in “The Truman Show” is addicted to their program. What happens to Truman is as far removed from them as whether Ross marries Emily on “Friends,” but they’ll still be watching, and with twenty-four hour coverage, they don’t even have to wait a week.

In addition to our obsession with media and entertainment, reality television has the added attraction that it’s not a fabricated world, but is, in fact, real. Truman himself demonstrates our value for real life. After thirty years, Truman Banks finally discovers that his life is a facade. While he has been making real decisions, responding to real emotions and real people, the reality only goes as far as his mind and intentions. Truman’s quest starts off as a desire to get beyond his mundane suburban insurance salesman life. But when the deception starts to be revealed, his goal becomes a genuine life; one where everything is not staged to fit him and love while being uncertain, is more real when it is given. In the end, it’s this quest for a real life that allows him to fight his fears and move beyond the constructed comfortable existence into one entirely unknown.

Truman’s decision shows just how valuable the genuine and real is and why people have been glued to television sets to watch his every move. Television plays into the desire to be entertained by something that is distant from one’s own life. But there’s a contradictory pull that says, with Truman, that reality with all of its pain and uncertainty is more valuable than the illusion and escape. We’d rather watch something that’s real, therefore, the popularity of “The Truman Show”.

The mix of these two desires, entertainment and reality, produces ambivalence in the audience as they watch Truman try to escape from his enclosed world. Just as I had been cheering him on throughout the film, by the end, the home viewers are also rooting for Truman to escape. In watching these viewers, I had to ask the question: do they realize that in religiously watching this television show they’ve been participating in keeping Truman in his confined world? I was actually surprised that there wasn’t anyone besides the director who wanted him to stay. After all, if Truman leaves, they will be left with nothing but reruns.

Instead, the film leaves us with one of the scariest facts of the world of reality television. While audiences are more drawn to it because it’s real, in the midst of standard entertainment, audiences still don’t think of these people on screen as real people. Truman is on television, so they don’t think of him as another human being that they are helping to keep confined. He becomes another piece of more exciting entertainment. On our television screens, we can’t distinguish enough between staged programming and reality television to take in the truth of what we’re watching. Certainly, the viewers of “The Truman Show,” other than one rebellious extra, did not realize that this was truly a man’s life. It would have horrified them.

Reality television hasn’t gone as far as “The Truman Show”. I hope that it never does. But we’re already living with other symptoms of the same contradictions. The quest for reality in entertainment has led to more and more cheap shows of the sensational crime. The inability to see reality for what it is has led to news programming that seems fit for tabloids rather than the six o’clock news. Can we not realize that these are real people whose lives are plastered on every television station for the world to see? That theirs is real experience and real pain? That the line between news we need to hear and gossip and slander for entertainment has grown painfully undefined? Truman Burbank escaped in spite of the public’s apathy to his situation, but real people in this real world have no such door to magically provide escape.