The Blind Faith of Atheism 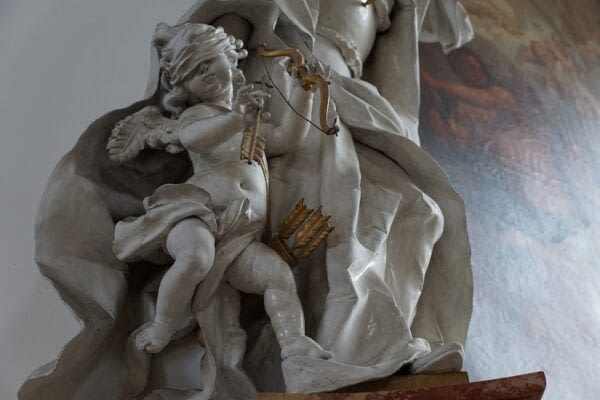 You may be thinking that this is a joke.  Surely atheism is not based on faith, let alone blind faith.  It’s Christianity that is based on an irrational unproven presumptuous faith.  Come let us reason together.  We will start by asking what atheism is.  According to Dagobert D. Runes in The Dictionary of Philosophy atheism is “the belief that there is no God.”

A few years ago, a professor who was also an atheist was challenging some of his Christian students during class because of their belief in the God of the Bible.  In fact, the students related how this professor seemed to make it his job to convince them of the absurdity of Christianity to the point of harassment.  Near the end of the semester a few of the Christian students asked the professor if he would be willing to debate the subject.  He heartily agreed, believing that if he could win the debate he would once and for all rid these students of their silly belief in God.  What follows is the transcript of that debate. “A” will denote the atheist and “C” the Christian.  (The atheist had his degree in biology and the Christian had two earned doctorate degrees, one in philosophy.)  The atheist was allowed to go first. 1

A:  You and I used to believe in Santa Clause when we were children.  But we no longer believe in him, do we?  It is the same way with God.  God is for childish minds.  No adult should believe in Him any more than believing in Santa Clause.  You see, there is no God. He does not exist any more than does Santa.  I know the Bible states “the fool says there is no God,” but I say that only a fool believes in God.  This is all I have to say.  Atheism is simply a matter of giving up childish beliefs.

At this point he sat down and the Christian was asked to give his opening remarks.

C:  In order for me to make my opening remarks I was hoping Professor “A” would assist me and come up to the blackboard. (He agreed and came forward.)  Would you please take this piece of chalk and make a dot on the blackboard.  It does not have to be big.  (He made the dot.)  Now professor “A” this dot represents you.  Would you now draw a circle around the dot with the dot in the center.  (Professor makes the circle.)  The inside of the circle represents all that you know; all you have studied and experienced; where you have been; and what you have seen and heard.  The outside of the circle represents what you do not know;  what you have not heard, studied, or experienced; where you have not been; and what you have not seen and heard.  Are you okay with this so far?

A:  Yes.  This is amusing.  I am interested to see where you are going with this.  Surely you do not believe that this little exercise is going to disprove my point?

C:  Now, obviously in this high tech age, there will be more outside the circle than inside the circle.  Since your degree is in Biology, would you claim to know a great deal about quantum physics or economics?

A:  No, I admit that I am limited in my knowledge.

C:  Given that this is the case, how much is outside the circle in comparison with what is inside?

A:  I cannot even give a good guess.

C:  What I mean is that if you walked in the Library of Congress, how many of the subjects would you say you knew?

A:  Well, I guess I would have to admit that I would only have a fraction of the knowledge that is even recorded, probably in the decimals.

C:  Agreed.  We would all have to admit, as the good professor has done, that our knowledge would be something like .000001%.  But for the purpose of this illustration let’s say that the knowledge you have in your field as well as all the other knowledge you have obtained on other subjects comes to 1% of all the knowledge out there.  You would agree that this is being generous?

C:  Would you please write 1% inside the circle? Remember this represents all the knowledge you have based upon study and experience.  Since you have 1% knowledge what is the amount of knowledge you do not have?

A:  No, I have never been to South Yemen.  This line of questioning is not fair.

C:  You see the point of my opening remarks is that it is philosophically and logically absurd to state such a universal negative as, “there is no God.”  The only one who could say that there are no gods of any shape or size in the universe throughout all time is God Himself.  A person would have to be in all places at all times with allknowledge in order to be able to say “there is no God.”  In short, you would have to be omnipresent and omniscient to have such knowledge.  And in order to pull the whole thing off you would have to be omnipotent as well.  So I will ask you again, is it possible for God to exist outside the 1% circle of your limited knowledge and experience?

A:  Well, yes.  To say otherwise would be (“C” interjects “BLIND FAITH”.)  I would have to admit that God could exist outside the circle.  But I think that it is impossible to know if He does.  This debate is not fair.  I did not know I would have to deal with this man.

C:  You said if I heard correctly, that it is logically possible for God to exist.  Therefore, it would be utterly illogical to say, “there is no God” since you would have to be God to know that there is no God, which would defeat your own thesis. Therefore, must we not conclude that your belief is totally based on faith, and a blind unproven faith at that?

C:  Well then, I have won the debate.  You have presented yourself to these students all semester as an atheist and now you have admitted in front of them that atheism is absurd.  But did I hear you correctly; you now claim to be an agnostic?

A:  I did not know what I was getting into when I agreed to this debate.  I don’t think this is fair at all.

C:  Since we have refuted atheism together and shown it to be a blind leap of faith perhaps you would be willing to discuss agnosticism.

C:  I hope that everyone has enjoyed tonight’s debate.  In terms of his original thesis professor “A” had to admit that his proposition was absurd and based on BLIND FAITH.  Maybe the next question should be, “Why does the professor not want to believe in God?”  We will let God answer that question Himself….

Romans 1:18-32, “For the wrath of God is revealed from heaven against all ungodliness and unrighteousness of men, who suppress the truth in unrighteousness, because what may be known of God is manifest in them, for God has shown it to them. For since the creation of the world His invisible attributes are clearly seen, being understood by the things that are made, even His eternal power and Godhead, so that they are without excuse, because, although they knew God, they did not glorify Him as God, nor were thankful, but became futile in their thoughts, and their foolish hearts were darkened. Professing to be wise, they became fools, and changed the glory of the incorruptible God into an image made like corruptible man—-and birds and four-footed animals and creeping things. Therefore God also gave them up to uncleanness, in the lusts of their hearts, to dishonor their bodies among themselves, who exchanged the truth of God for the lie, and worshiped and served the creature rather than the Creator, who is blessed forever. Amen. For this reason God gave them up to vile passions. For even their women exchanged the natural use for what is against nature. Likewise also the men, leaving the natural use of the woman, burned in their lust for one another, men with men committing what is shameful, and receiving in themselves the penalty of their error which was due. And even as they did not like to retain God in their knowledge, God gave them over to a debased mind, to do those things which are not fitting; being filled with all unrighteousness, sexual immorality, wickedness, covetousness, maliciousness; full of envy, murder, strife, deceit, evil-mindedness; they are whisperers, backbiters, haters of God, violent, proud, boasters, inventors of evil things, disobedient to parents, undiscerning, untrustworthy, unloving, unforgiving, unmerciful; who, knowing the righteous judgment of God, that those who practice such things are deserving of death, not only do the same but also approve of those who practice them.”