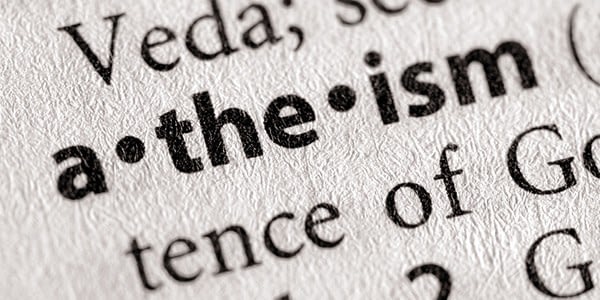 Atheism is, essentially, a negative position. It is not believing in a god, or actively believing there is no God, or choosing to not exercise any belief or non-belief concerning God, etc. Which ever flavor is given to atheism, it is a negative position.
In discussions with atheists, I don’t hear any evidence for the validity of atheism. There are no “proofs” that God does not exist in atheist circles; at least, none that I have heard — especially since you can’t prove a negative regarding God’s existence. Of course, that isn’t to say that atheists haven’t attempted to offer some proofs that God does not exist. But their attempted proofs are invariably insufficient. After all, how do you prove there is no God in the universe?  How do you prove that in all places and all times, there is no God? You can’t. Besides, if there were a proof of Gods non-existence, then atheists would be continually using it. But we don’t hear of any such commonly held proof supporting atheism or denying Gods existence. The atheist position is very difficult, if not impossible, to prove since it is an attempt to prove a negative.  Therefore, since there are no proofs for atheisms truth and there are no proofs that there is no God, the atheist must hold his position by faith.
“Since atheism cannot be proven and since disproving evidences for God does not prove there is no God, atheists have a position that is intellectually indefensible.”
Faith, however, is not something atheists like to claim as the basis of adhering to atheism. Therefore, atheists must go on the attack and negate any evidences presented for Gods existence in order to give intellectual credence to their position. If they can create an evidential vacuum in which no theistic argument can survive, their position can be seen as more intellectually viable. It is in the negation of theistic proofs and evidences that atheism brings its self-justification to self-proclaimed life.
There is, however, only one way that atheism is intellectually defensible and that is in the abstract realm of simple possibility. In other words, it may be possible that there is no God. But, stating that something is possible doesn’t mean that it is a reality or that it is wise to adopt the position. If I said it is possible that there is an ice cream factory on Jupiter, does that make it intellectually defensible or a position worth adopting merely because it is merely a possibility? Not at all. So, simply claiming a possibility based on nothing more than it being a possible option, no matter how remote, is not sufficient grounds for atheists to claim viability in their atheism. They must come up with more than “It is possible,” or “There is no evidence for God,” otherwise, there really must be an ice cream factory on Jupiter and the atheist should step up on the band wagon and start defending the position that Jupiterian ice cream exists.

At least we Christians have evidences for God’s existence such as fulfilled biblical prophecy, Jesus’ resurrection, the Transcendental Argument, the entropy problem, etc.
But there is another problem for atheists. Refuting evidences for Gods existence does not prove atheism true anymore than refuting an eyewitness testimony of a marriage denies the reality of the marriage. Since atheism cannot be proven and since disproving evidences for God does not prove there is no God, atheists have a position that is intellectually indefensible. At best, atheists can only say that there are no convincing evidences for God so far presented. They cannot say there are no evidences for God because the atheist cannot know all evidences that possibly exist in the world.  At best, the atheist can only say that the evidence so far presented has been insufficient. This logically means that there could be evidences presented in the future that will suffice. The atheist must acknowledge that there may indeed be a proof that has so far been undiscovered and that the existence of God is possible. This would make the atheist more of an agnostic since at best the atheist can only be skeptical of Gods existence.
This is why atheists need to attack Christianity. It is because Christianity makes very high claims concerning Gods existence which challenges their atheism and pokes holes in their vacuum. They like the vacuum. They like having the universe with only one god in it:  themselves.