How should we then live? 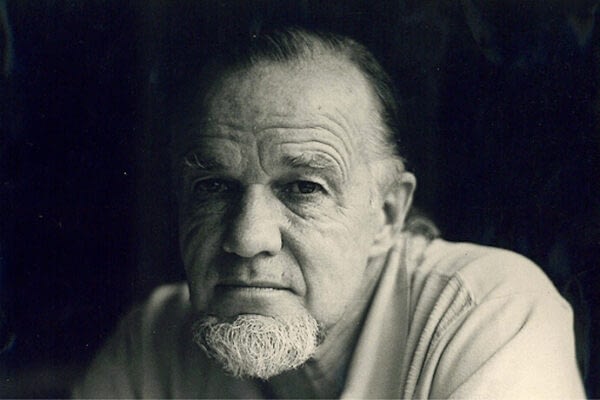 Recently I was cleaning out an old box full of articles when I stumbled across a dated cassette and workbook packet that was designed for church groups. The cassette tapes (published by Gospel Films) were recordings of Francis Schaeffer’s teaching series, “How Shall I Then Live? The Rise and Decline of Western Thought and Culture.” Independent of the workbook was a transcript of a radio interview Francis Schaeffer did on his book and film series, How Shall I Then Live?  As far as I can tell, the interview was never published nor is it available anywhere today. I have done some work to edit the interview as the typed transcript was very choppy. The interview was originally a broadcast conducted by Franky Schaeffer V in Francis Schaeffer’s home in Switzerland where he introduces his ten-part filmed T.V. series and book entitled, How Shall I Then Live?

Dr. Schaeffer, I would like to begin by asking you very simply: Why have you made this film series and why have you written this book at this time?
Well, we have done both the book and the film, hoping that people of our own day would understand better why our culture has come to the place which it has come in our own day. In order to do this, we have begun with the Romans and gone through the three lines of philosophy, science and religion to show why we are where we are. And then, it is our hope, that people will see the alternatives that are before us at this moment.

What is the over-riding message that you have for us in this series and in this book?
Well, I think I would begin by saying that the sub-title of the book and the film is “The Rise and Decline of Western Thought and Culture.” Our hope is that people will see why our culture is in the present decline and will do the things that are necessary in order to turn around that decline.

How long did you take in making this project?
Without any question, it is the hardest task I have ever undertaken. I have been working on it for over 2-1/2 years, now.

But, your basic study, being a man of your age, has gone on many years longer, hasn’t it?
Yes, I would say that it encompasses about 3 years of study and this would be on two lines: my academic study and my personal study constantly through the use of books, the normal academic things. But also, I have been very fortunate in these past 25-30 years to have people come to me to talk from literally all over the world. Many of these are brilliant in their own field. As I talked to them in answer to their questions, I have listened so I have had an opportunity of a double way of learning – from my books and from talking to people across the spectrum of study.

What do you hope to achieve out of this project? What results would you like to see it bring in the culture in the West?
First to the individual, that the individual might find the answers to his questions and, especially above everything, the answer to his question of life. Second, for the Christians, that they might understand our culture better and speak into that culture better as well as live into it better. And then, third, the greatest of all hope, we would hope that perhaps the culture itself could be turned around in a new direction.

What kind of difficulties did you face making this project?
First of all, the overwhelming amount of material that poured in from the Researchers— just the handling of this was very difficult indeed. And then, a very special problem: putting the world of thought and ideas into film form. To the best of my knowledge this has never been done before, covering these lines of thought which we have covered. It was very difficult. I would like to say that I don’t think it would ever have been possible, if it hadn’t been that literally hundreds of people were very, very unselfish in pouring everything they had into this project, because they believed in its importance.

You are known as an evangelical leader, perhaps the foremost evangelical thinker of our times. Are you optimistic about the future of the Christian church or not?
I would say yes if (and with a very strong emphasis on the “if”) Christians will really hold to the Bible as an absolute absolute, by which they are then able to judge and to help the society which surrounds us. I would also say yes if the individual Christian and the Church would really learn and practice the Lordship of Christ across the whole spectrum of life.

In closing, you feel that we are in a state of decline in the West. Why would you say this has come about?
I feel that what is bringing this decline in our specific moment of history is that, instead of resting on the Christian base which came out of the Reformation thinking, and therefore, for example, in law having a solid base upon which to build, instead of that, man has turned to himself, made himself a center, and he has tried to generate his own meaning and his own absolutes, his own basis for law, and this is just a complete impossibility because beginning with the finite, it is impossible to project an absolute.

What do you feel is the answer to this decline?
The answer is reaffirming that which gave us our freedoms, without these freedoms leading to chaos in the first place. And that is the existence of the personal infinite God and the fact that he has not been silent but that he has spoken a truth which we can understand and that this truth is not only religious truth, but religious truth about the cosmos and about man.

Matthew Barrett is Tutor of Systematic Theology and Church History at Oak Hill Theological College in London, as well as the founder and executive editor of Credo Magazine. He is the author of several books, including Salvation by Grace, Owen on the Christian Life, God’s Word Alone: The Authority of Scripture,  and Reformation Theology. Currently he is the series editor of The 5 Solas Series with Zondervan. You can read more about Barrett at matthewmbarrett.com.