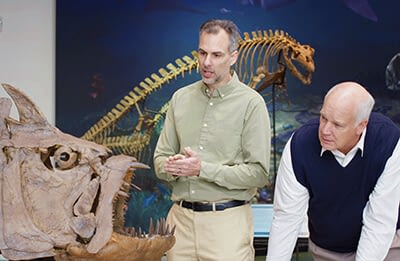 This week, Liberty University students will have the opportunity to see one of their professors, Dr. Marcus Ross, present the case for young-earth creationism (YEC) on the big screen, using his expertise in geology to show how scientific evidence supports this view. The film “Is Genesis History?,” featuring Dr. Del Tackett of Focus on the Family’s Truth Project, is being shown during a one-night national theatrical release on Thursday, Feb. 23, with hundreds of locations hosting the film. A showing will be held in Lynchburg at 7 p.m. at the Regal River Ridge Stadium 14. 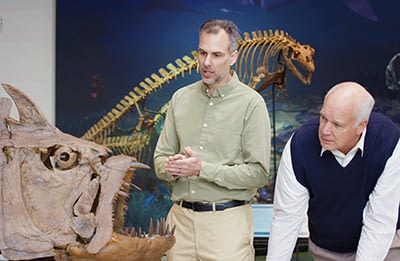 “Is Genesis History?” explores a number of scientific topics in the context of the Bible. Thirteen scientists and scholars share their expertise, making a positive argument for biblical creation and Noah’s flood. From rock layers to fossils, and from lions to stars, the film challenges the way viewers see the world. (Young-earth creationists believe that the creation days of Genesis 1 were six literal, 24-hour days, which occurred several thousand years ago and that Noah’s flood was global and had a profound impact upon the fossil record.)

Dr. Marcus Ross (left) films a scene at Discovery Park of America (Tenn.) with host Dr. Del Tackett. The two are examining a skeleton of the extinct fish xiphactinus.

“A lot of it comes down to what the sources of evidence are,” said Ross, director of Liberty’s Center for Creation Studies and an associate professor of geology in the Department of Biology & Chemistry. “If you are going to say that the rules of science exclude any forms of evidence that aren’t derived from a naturalistic set of experiments or observations, then something like evolution is going to have to be true — you are deciding ahead of time that there is only a certain path out there. There might be lots of different ways in that path, but the reality is that there is only one system. I never felt that was logically necessitated, and there is no way that I would say that the Bible is irrelevant to this discussion.”

Ross serves as an expert on the fossil record in the film and his segment takes place at Discovery Park of America in Tennessee.

Ross is no stranger to the YEC-evolution debate. He garnered attention from the New York Times when he completed his Ph.D., publishing research through an evolutionary perspective while maintaining his YEC beliefs. He has appeared in three documentary projects on the topic (“Is Genesis History?” is the first to show in theaters). He also manages Cornerstone Educational Supply, a company that provides engaging, hands-on educational materials and curriculum from a YEC perspective for homeschoolers.

Ross explains to Tackett what dinosaurs can tell us about the Earth’s origins.

In paleontology, unlike other areas of science, the age of the earth and evolution are at the forefront of discussion every day. Since declaring himself a creationist, he said he is often met with criticism when presenting research. Still, Ross has the credentials to prove his proficiency in the field: he holds a bachelor’s degree in earth science from Pennsylvania State University, a master of science in paleontology from South Dakota School of Mines and Technology, and a Ph.D. in geosciences from the University of Rhode Island.

“Most colleagues (in paleontology) think that a creationist is an uneducated individual,” Ross said. “Those I’ve met know that I am versed in the topics of paleontology. They may not understand why I think the Bible is relevant to this debate, but they can’t dismiss me as someone who does not understand geology or the fossil record.”

His educational experience has given him an empathy for those whom he disagrees with and has helped him to inject love into what can oftentimes be a hot-button debate filled with hostility.

“Even though I have big differences with them, when I think of an evolutionist, I think of a real person that I know,” he explained. “These names and these terms have real people associated with them. I think God used (my state school education) to soften my heart toward those who don’t agree with me.”

This carries over into how he teaches at Liberty. In his science classes, Ross teaches students how the greater scientific community interprets evidence while also sharing how they can be viewed from a YEC perspective. Ross also teaches creation studies, an apologetics course that is part of Liberty’s general education curriculum. He realizes that in a large class, not every student is a young-earth creationist.

“I want to be a passionate advocate for YEC, but I want to be a respectful advocate and a respectful communicator to those that disagree,” he said, noting that he doesn’t like it when issues are used to polarize people. “My goal is to present YE creationism in a fresh way that is academically rigorous, that is spiritually deep, theologically sound and robust, and appealing to those who have not considered it before. I want students to be in a place where they can be challenged and feel safe to come to me with questions, even if their views are not in line with mine.”

Ross said he is encouraged at Liberty to investigate how the natural world and his faith intersect. Etched in stone at the entrance to Liberty’s Science Hall is the opening line of Genesis: “In the beginning God created the heavens and the earth,” a purposeful reminder of the university’s foundation upon a biblical worldview.

“God has a way of putting His people where they need to be,” Ross said. “I am where I need to be. There are a whole bunch of students here who sooner or later will be out where God wants them. All they need is the confidence to hear God and act. If I can help instill some of that through the story that I have to tell, all the better.”

Ross will also represent the YEC perspective in a debate with theistic evolutionists at the Evangelical Theological Society Annual Meeting in November.