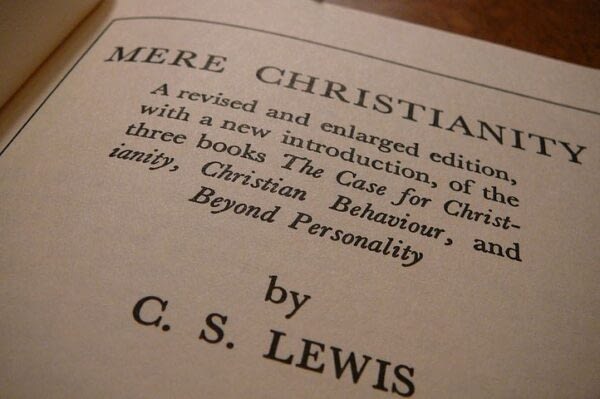 I am trying here to prevent anyone saying the really foolish thing that people often say about [Christ]: ‘I’m ready to accept Jesus as a great moral teacher, but I don’t accept His claim to be God.’ That is the one thing we must not say. A man who was merely a man and said the sort of things Jesus said would not be a great moral teacher. He would either be a lunatic—on a level with the man who says he is a poached egg—or else he would be the Devil of Hell. You must make your choice. Either this man was, and is, the Son of God: or else a madman or something worse. You can shut Him up for a fool, you can spit at Him and kill Him as a demon; or you can fall at His feet and call Him Lord and God. But let us not come with any patronising nonsense about His being a great human teacher. He has not left that open to us. He did not intend to. (52)

This argument has occasioned a good deal of discussion, with major thinkers and biographers lining up on either side of the question of its validity. Marsden suggests that two major critiques have been leveled at Lewis’ argument. These posit fourth and fifth options that Lewis doesn’t appear to consider:

Marsden doesn’t explicitly take a position on Lewis’ trilemma, but if I may read between the lines of a scholar who frankly confesses his evangelical faith, I feel fairly confident that he favors the argument—especially for what it was (as Marsden points out), an argument presented to laypeople and purposefully not bothering with the niceties of scholarly debate.

Marsden’s canvassing of modern opinion also ends up bringing out at least one important point I didn’t know—exactly the kind of thing I was hoping to get from this book. Namely, in Lewis’ original talks he added a little sentence anticipating the first objection above, “Th[is] theory only saddles you with twelve inexplicable lunatics instead of one” (148).

Lewis was not unaware of the state of critical opinion on the New Testament. In fact, he tackles it in other places in his writings. Lewis (in an essay I admit I can’t find because I was listening to it in a massive audio collection) finds it a bit touching that modern readers 2,000 years on can be so confident in their reconstructions of the historical Jesus. Lewis points out that he has many times observed critics guessing at reconstructions of his own (Lewis’) writings and that of his friends. These critics shared Lewis’ time period and his general cultural framework—and never once were their reconstructions of Lewis’ motivations correct. Critics guessed, for example, that Lewis’ lion Aslan and a similar character in the work of his friend and fellow Inkling, Charles Williams, must be related. Their guess was wrong. If critics can’t get Lewis and Williams right, how, Lewis says, could they possibly have figured out the true origin and formation of the NT given the historical and cultural distance they must overcome?

So even from a secularist, empiricist viewpoint, I recommend a canonical-critical approach in which, historically speaking, the New Testament comprises the documents that gave shape to the Christian church, and we must ask: what, in fact, do they teach? They teach, implicitly, the trilemma. They don’t imagine themselves as mere legends.

From a religious perspective, too, I believe the pictures of Jesus in the Gospels and epistles must be allowed to hang together rather than being pulled apart and set against each other—precisely because the Bible claims divine authority. If we deny that some aspects of the Jesus tradition are true, we are setting up some authority over God’s own words, some principle(s) by which we fallen and finite creatures discern what’s true and what isn’t in God’s speech. I can’t and won’t do that. I don’t think there’s a neutral ground from which one can evaluate Jesus’ claim to be Lord and God. “Fallen man is not simply an imperfect creature who needs improvement,” Lewis said in his famous book. “He is a rebel who must lay down his arms.” If that’s true, it’s true epistemologically and not just morally. If that’s true, in fact, then epistemology is only one subset of morality. The fear of the Lord is the beginning of knowledge.

I love the trilemma. I’m all for it. Given that the Bible is really the only historical record we have from eyewitnesses to Jesus, it’s the only picture of him we really ought to be ultimately concerned with, and I think we are forced to take it or leave it. All of it.
Lewis’ trilemma actually leaves us with two choices, not three: believe the Bible’s picture, or don’t.

Study Lewis’ work for yourself with 30 fully-searchable volumes of his finest books and 3,000 pages of collected letters in the C.S. Lewis Collection.

Mark L. Ward, Jr. received his PhD from Bob Jones University in 2012; he now serves the church as a Logos Pro. He is the author of multiple high school Bible textbooks, including Biblical Worldview: Creation, Fall, Redemption.