How Young Is the Young Earth? 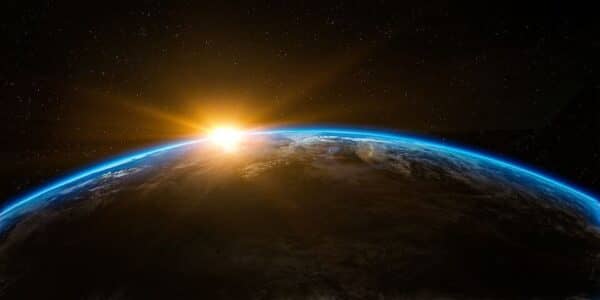 According to the mainstream Big Bang idea, our universe abruptly sprang into existence some 15 billion years ago, sending matter careening through space. After millions of years it had cooled enough to coalesce into billions of rotating proto galactic-discs, and much later into stars. Over the billions of years, some stars underwent super nova, spewing material back into space, which later coalesced into second generation stars, some of which likewise exploded, leading to third generation stars like our sun. The planets are comprised of left-over star dust which didn’t fall into the sun.

Even though our earth and its solar system is thought to be about 4.6 billion years old, it is much younger than the first and second generation stars, the galaxies, and sub-atomic particles shooting everywhere through space. Indeed, hardly anything is younger than earth.

Conversely, the Bible indicates that the creation of all things was accomplished in a six-day period just a few thousand years ago. The earth was created on Day One while the sun, moon, and stars were created on Day Four. Since thousands is less than billions, the term “Young Earth” has come to describe the recent creation position.

At a recent seminar, my friend, Mr. Tom Godfrey challenged me on the use of the term “Young Earth” for the following reasons:

First, according to our creationist perspective, nothing in all of creation is older than the earth, because it was created “in the beginning” (Genesis 1:1). Consequently, if the earth is young, then everything else is as young or even younger. According to the Big Bang idea, the universe itself is much older than the earth, so in their model the earth could be considered young in comparison. So for them, the descriptor has real meaning. Only by comparing a few thousand years with over four billion years as the age of the earth in two distinct perspectives can we rationalize the idea that the earth is “young.” The validity of the term depends entirely on the existence of the two perspectives, both of which are assumed to be viable.

Second, consider a “new” building. Can we also call it a “young” building? I do not think so. A building can be old, but it cannot be young. We reserve the term young for things that are alive and growing toward maturity. Inanimate objects do not qualify, because they are at their best and full sized when first constructed.

So what term would be more appropriate than young? Terms like new and recent avoid the second problem, but not the first. If the earth is new, what can be old? What came into existence less recently from our perspective? The creation of the earth is the least recent event in history.

A dilemma indeed. I am not proposing we drop the terms young earth and old earth, for they are descriptive and well established. Tom suggests we call ourselves “historic-earth creationists,” not only because it is accurate, but it acknowledges the true history of Scripture. Meanwhile, considering the term helps reinforce an important truth.