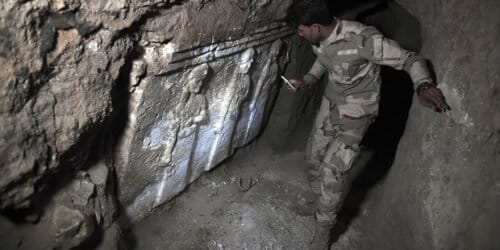 Incredible treasures from a buried palace see the light of day, thanks to tunnels dug by ISIS

While ISIS was responsible for destroying and selling countless priceless artifacts during their occupation of Iraq, their acts of plunder have led to an important discovery in the ancient Biblical city of Nineveh, according to a report in Live Science.

In four tunnels which ISIS dug underneath the Tomb of Jonah, archaeologists have discovered seven 2,700-year-old inscriptions describing the rule of an Assyrian king mentioned in the Bible.

After the Iraqi army liberated the area from ISIS in early 2017, archaeologists found the tunnels, which ISIS had apparently dug in order to collect and sell artifacts on the black market. Last year, archaeologists announced that while exploring the tunnels they had unexpectedly discovered the site of the Assyrian palace located under Jonah’s tomb.

“The palace of Esarhaddon, strong king, king of the world, king of Assyria, governor of Babylon, king of Sumer and Akkad, king of the kings of lower Egypt, upper Egypt and Kush [an ancient kingdom located south of Egypt in Nubia].”

Esarhaddon was the son of Sennacherib, who according to the Bible was murdered by his sons in 681 BC after he failed to capture Jerusalem (2 Kings 19:37). Esarhaddon then returned to Nineveh, declared himself king, and forced his brothers into exile. That same year he was thought to have begun work rebuilding Babylon, including buildings scholars have associated with the Tower of Babel.

The inscriptions under the Tomb of Jonah also say that Esarhaddon “reconstructed the temple of the god Aššur [the chief god of the Assyrians],” rebuilt the ancient cities of Babylon and Esagil, and “renewed the statues of the great gods.”

These findings were recently published by Cambridge University Pressand  include the results of archaeological excavations conducted near the Tomb of Jonah from 1987 to 1992. Archaeologists were not able to publish their findings at the time because of conflicts in the region.

Among the earlier findings is an inscription that quotes Esarhaddon discussing his military conquests. It reads:

“I surrounded, conquered, plundered, demolished, destroyed and burned with fire twenty-one of their cities together with small cities in their environs. …”

In June of 2014, militants from ISIS destroyed the burial site of the prophet Jonah, a figure revered in Jewish, Christian and Muslim traditions. In Christianity, Jonah, who survives being swallowed by a whale, is seen as pointing to the death and resurrection of Jesus. Members of ISIS consider all religious shrines to be idolatrous, and were responsible for demolishing many important cultural heritage sites throughout the regime.