From Premier League footballer to pastor: Gavin Peacock explains why there’s more to life than the game

Exclusive: It’s nine years now since Peacock walked away from football, left for Canada with his wife and two children and began to dedicate his life to God

Gavin Peacock can still pinpoint the exact moment when it all changed. “I was reading the Bible – as I had done for many years – when I sensed a burning inside, not just to read it but to teach it. There was a desire to do it. But also a compulsion. A joyful compulsion, I’d call it. There’s a great joy when I preach or when I lead in a church but I also feel like I must do it.”

It’s nine years now since Peacock walked away from football, left for Canada with his wife and two children and began to dedicate his life to God.  A Christian throughout his decorated playing career with Newcastle, Chelsea and QPR, Peacock’s ‘calling’ led to some exploratory religious studies at Cambridge – while he was still a well-respected pundit with the BBC – to gauge whether his enthusiasm for ministry had any merit.

“I remember being on Match of the Day 2 on a Sunday night and then driving up to Cambridge the following day for Old Testament studies and all the lads in the class with me – all training to be pastors and vicars – just wanted to talk about the football. The teacher is discussing the Book of Genesis and the prophets and there are guys next to me saying, ‘I can’t believe you hammered Arsenal on TV last night’ and asking me what Alan Shearer was like.”

In 2008, after embarking upon a Theology degree, he made the decision to continue his journey but away from prying eyes. The family had been holidaying in Canada for years but the full-time move to the sleepy Alberta town of Canmore, in the shadow of the Rocky Mountains, proved inevitably jarring.

Emigration was only part of the problem. Not only was he trying to settle in a new country, Peacock was also attempting to transition into an entirely new world.

“The last nine years have been the most difficult time of our lives,” he admits. “People think we’re in Canada for the good life but I moved here for a purpose. It can be very unsettling when you move across the ocean. You’re missing loved ones and it takes you time to really get over that homesickness. Also, I was back in full-time education. A couple of months after covering the Euros in front of millions of people on TV, I was driving from Canmore to Calgary at 7am to do Hebrew and it’s minus-25. I’m thinking, ‘What have I done?’” On one hand, the anonymity was refreshing. But, the isolation and distance from the football world, at times, was difficult to navigate.

“It’s not like I stayed in England and there was still a general hubbub of football,” he says. “It was a complete cut-off, a bit like an amputation. There was a sense of loss. But when there’s something greater, it fills that sense of loss. So I’ve learned to deal with that and cope with that.

I always liken it to getting fit: no pain, no gain. When the muscles are stretched, the fibres are tearing but you’re getting stronger. I talk a lot now about the fibres of faith. When everything you’re tempted to rely on – family, career, money – shifts for any reason, what are you standing on? Dependency on faith is what grows. All those other things are transient, they come and go. So, through the difficulty, we’ve grown deeper in our faith in Jesus Christ. It’s been a very testing time but a very fruitful time.”

After Peacock completed a three-year Masters degree in Divinity at Calgary’s Ambrose Seminary, he began full-time ministry with Calvary Grace Church in 2012. Decades after one professional debut, there was another to contend with.

“My first appearance for QPR was against Sheffield Wednesday in November 1986, on the old Loftus Road plastic pitch,” he says. “I was really nervous. It’s weird what you remember. I’m warming up and The Final Countdown was playing and I’m thinking, ‘Well, that’s not really reducing any of the pressure’. The game went really quick but I did alright. A steady job.

Regarding my preaching debut, I had an evening service. 15,000 or 20,000 watched my debut for QPR and there was about 15 in the church on that Sunday evening. But I was probably more nervous. Because they say that when you’re preaching, you’re doing it to an audience of one: you’re preaching for God. It’s preaching to people but to honour God and I’ve always felt the weight of that.”

Initially, Peacock was wary of using his football career to try and publicise his new path. But, inevitably, many remain fascinated by his journey from sport to ministry and want to hear his story. He also takes inspiration from Eric Liddell, a long-time hero of his. 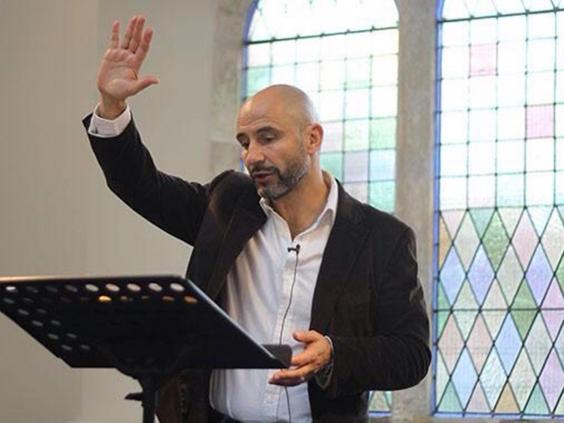 “After reading Duncan Hamilton’s biography of him, For The Glory, I related to Liddell quite a lot,” Peacock says. “Not that I was ever a great Olympian but just the whole thing about sports and ministry and he died for the sake of ministry in China. Even our backgrounds too. I’m from Eltham in south-east London and Liddell actually went to Eltham College. When I was back in the UK a couple of months ago, my sister said, ‘You know that you have a bench dedicated to you in Eltham High Street?’ I had no idea but went out for a meal that night and I saw a bench dedicated to Bob Hope – who was born there – and then Liddell’s one too. So, we went looking for mine and we’re up and down the street and it’s night-time. There’s a guy sitting on a bench outside KFC and he says, ‘Have you got any money, mate?’ And I just said to him, ‘Sorry, but can you move out of the way – I’m just trying to see if this bench is dedicated to me.’”

The door has always been left open regarding a possible move back to the UK but Canadian roots are getting stronger all the time. And, after an intense, challenging decade, Peacock is in a good place.

“You’re caring for souls,” he says. “One of the pleasures of being a pastor is getting to deal with people. You’re with them at their happiest and saddest moments of their lives and you’re invited into that. Your task is to shepherd them though. I take it as a great privilege and it’s not something I take lightly.

“That’s not to say I don’t miss it. I loved football. But there is something more valuable in my life. A greater glory, like Eric Liddell would say.”